For September, the Saint of the Month for Challenge & Conquest is someone very special  because he is about to be canonized a saint by Pope Francis  on September 23rd in Washington DC . It’s soon to be Saint Junipero Serra. His life story reminds us not to take our faith for granted. There were people who dedicated their whole lives and suffered a great deal to bring the Catholic faith to North America. Fr Serra was one of those people. 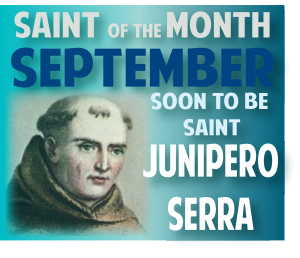 Miguel Jose Serra was born in Spain in 1713, and took the name of Junipero when he entered the Franciscan Order. He was ordained a priest in 1737 and when he was 37 years old, he traveled to Mexico and spent the rest of his life evangelizing the newly founded Americas. He was once bitten by a snake and suffered from it throughout his life, though he continued to make his journeys on foot whenever necessary. Father Serra took over the missions in California stretching from San Diego to San Francisco.  He was in a large part responsible for the foundation and spread of the Church on the West Coast of the United States when it was still mission territory.

He founded twenty-one missions and converted thousands of people. The people in the missions were not just taught the faith. They were taught methods of agriculture, cattle raising, and arts and crafts. He brought to California the European products that eventually became central to the state’s agriculture empire: oranges, lemons, olives, figs, grapes, and vegetables, as well as cattle, sheep, goats, and horses.

He suffered intensely from his crippled leg yet he would visit all of his missions  from San Diego to San Francisco, traveling more than 600 miles in the process, in order to give the sacrament of confirmation to all who had been baptized. He confirmed over 5000 people.He died in 1784, worn out by his apostolic labors. He was beatified by Pope John Paul II in 1988 and Pope Francis will canonize him in September 2015. His feast day is July 1st.

For more information about his life, there is a great website with many resources: https://stjunipero.org/ and the USCCB has resources available online in light of Pope Francis’ visit.