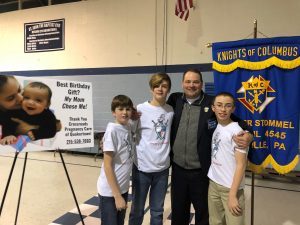 The Conquest Club at St. John the Baptist Parish in Ottsville, Bucks County, PA, decided to take on the challenge of the Conquest Club “Big ‘N Bold” service project this year. The goal of the project was to design a billboard promoting life through the work of a local pregnancy center and then raise the funds to put the billboard up in their community. As a first step, the Club visited Crossroads Pregnancy Center to learn about the compassionate and life saving work they do for mothers and the babies in need. According to Conquest member Josh Stanbro, “we were inspired by what we learned and together, we designed a billboard ad that promotes the best birthday present ever – LIFE!” 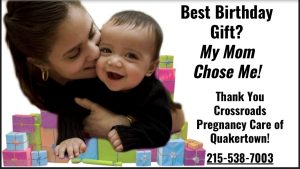 Their Club decided that they wanted to put their ad up on a 3-sided triangular digital billboard in their community. Conquest member Luke Luna then reached out to a local billboard company and found out that if the Club raised $2,000 they could get their ad on one side of the billboard. If they raised $4,000 they could get their ad on all three sides. The boys agreed that they would shoot for the $4,000 goal! To reach their goal they worked together to script, star in and produce a fundraising video and launch a GoFundMe Campaign. They have been hard at work promoting their campaign and have raised $2,471 to date! One of the largest donations came from the Parish’s Knight of Columbus Council. The Conquest Club boys wrote to the Council and asked to speak to the members. They delivered their speech and presented their billboard concept to the Knights who gave the boys a standing ovation and awarded them $1,000 toward their goal!

The boys are excited to continue fundraising and have a few other presentations lined up. They are grateful to anyone and everyone who would like to donate to bring this message of “life” the greatest gift – to women and child in need. To donate and/or to share their campaign, please visit www.gofundme.com/ConquestForLife