More than 80 girls were jumping for joy at this past summer’s Challenge “JUMP!” Camp. The event took place over two different weeks in July and August in Alberta and Saskatchewan, Canada. The theme for this year’s camp was “The Ultimate Leadership Experience.” From July 25-30, the camp took place Our Lady of Victory Camp for those in the Alberta Region, and from August 6-13 for those in Saskatchewan and surrounding area.Daily sessions centered on developing dedication, authenticity, conquering faults with willpower, and developing character. A handful of volunteers and team leaders were in attendance to direct the sessions and activities, and two Regnum Christi consecrated women were also there to provide daily prayers, spiritual talks and one-on-one mentoring. 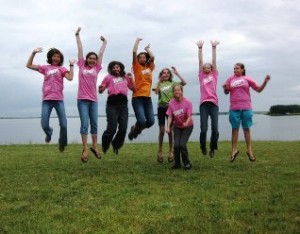 Each morning the conference opened with a dynamic activity focusing on a world leader and role model such as Tony Melendez, Eduardo Verástegui, John Paul II, and Mother Teresa. All camp activities, including canoeing, Olympic games, scavenger hunts, and dance and swimming competitions, were linked to the theme of the day. At meal times, girls dressed as their favorite role model, as guests at the Vatican, and even wore their craziest hairdos. One daily team activity called the Camp Campaign involved teams choosing a challenge requiring the virtue of charity. If they fulfilled the challenge, their team’s colored frog moved forward on a “lily pad towards heaven.” Girls also individually received a secret pal to pray for, write encouraging notes to, and offer other acts of kindness for. A memorable moment from the conference took place when one of the youngest teams in the 10-year old group gathered around to motivate and cheer on a fellow team member who was too shy to pose for a group photo.   Haley Herbert, age 15, who was invited to help out as a team leader for the Alberta camp, admitted that, before she arrived, living out her faith had been a challenge. “The experiences I had at camp were life-changing,” she said, with all the enthusiasm typical of a teen. “And I have a new friend for life!” (She was referring to Maddy Herring, another team leader at the event.) Haley is currently fundraising in order to return to Canada to help out in the future.