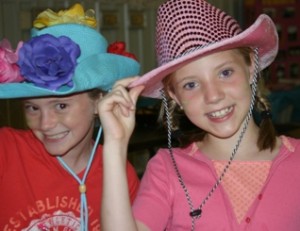 From July 13 to 19, 100 American and Mexican girls ages 10 to 13 converged on Tomball, Texas, just outside Houston, for the annual Challenge Camp Summit. The girls and their slightly older team leaders were accompanied by about a dozen counselors (ECYD coworkers from across the United States), four consecrated women, and a group of mothers who served as chaperones. The theme for the camp was “JUMP into Leadership!” Accordingly, the girls received talks on the virtues of a true leader, from authenticity and conviction to willpower, positive spirit, friendship, and teamwork. Plenty of fun activities kept the girls hopping, such as Messy Olympics (with a fire truck to wash the girls off afterwards), a giant bubble machine, a water slide, and a trip to Splashtown water park, where the girls’ cheers could be heard echoing through the park.Every night, the camp counselors hosted a different party with activities for the girls. The first night’s party was themed “It’s a Year Round Party,” and each of the counselors dressed up as a different holiday season, from Valentine’s Day and Easter to St Patrick’s and the 4th of July. Meanwhile, the camp director dressed up as Birthday Girl and invited everyone to her party, which was full of activities.The twist of this party was that the campers had to go from party to party to earn a rainbow stripe on their arm. But halfway through, the “party crashers” (the ECYD coworkers) came storming in to black out the girls’ stripes, obliging them to go back to the party they had been to before. “It was a blast and the girls really got into the game. It was a great way for them to meet their camp team leader for the week,” said Michelle Weatherford, one of the mothers who volunteered as a chaperone. The girls also had moments of prayer together, such as the Holy Hour in front of the Blessed Sacrament exposed or morning prayers. There were also other quiet moments when the girls took it upon themselves to pray. One mother observed, “One night, as I was busy turning out the lights (for the second time), I went by a room with three girls who were on their knees praying together. My heart filled with joy! It isn’t easy being twelve and witnessing to your friends.” On another occasion, one of the girls wasn’t feeling well and had to go be with the nurse, so the girls on her team spontaneously suggested that they pray the Rosary for her. It was a small gesture, but a meaningful one. “As a mom, I love watching the girls as they do a quiet charitable act for someone or help a girl that needs a little extra kindness or laugh so hard as they totally dance themselves into exhaustion on the dance floor,” said another volunteer. In the midst of the cheers, games, and parties, Camp Summit was planting little seeds of faith, love, and unity. Not a bad way to spend one week out of the summer.