This past July 5 -10, a group of 33 Palestinian girls, 7 team leaders, and 2 mothers participated in a Challenge day camp aimed at fostering a deeper experience of Christ in the holy places where his earthly life unfolded. The camp ran every day from 8:00 A.M. until 4:00 P.M., and was based out of the Notre Dame of Jerusalem Center, which is just outside the Old City walls. Every day, the girls had excursions to recreational places like parks and swimming pools as well as to different holy sites, such as the Cenacle, the Church of the Dormition, and the Franciscan Chapel of the Cenacle in Jerusalem to various places in Galilee, including Capernaum, the Church of the Primacy of Peter, and the Sea of Galilee, where the girls enjoyed a boat ride. 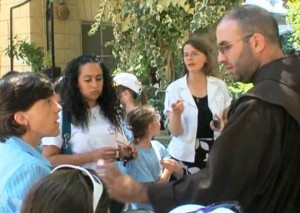 They also had a sleepover in Bethlehem on the final night of the camp. Although these girls and their team leaders live in the Holy Land, the camp awakened a new spark of faith, helping them to see the holy places through new eyes. At the end of the camp, a girl from an Armenian family spontaneously took the girls walking in Jerusalem. A nine-year-old camper was so determined and excited to get to the camp that she got up at 4:00 every morning to ride to the Notre Dame of Jerusalem Center with her father, who works there. Because of the military checkpoints, he has to get up early every day to make it to work on time. Most little girls are not keen on getting up before the crack of dawn, but her father commented on how eager she was to get to the camp, and how joyfully she made the daily sacrifice. Some of the highlights of the camp were captured on a YouTube video published by Canção Nova, which is a Catholic charismatic movement founded in Brazil in 1978. Members of Canção Nova are active in Jerusalem and are often present at religious events, including events at the Notre Dame Center. The collaboration with Canção Nova actually began last year, when the consecrated women asked them if they could record the girls’ skits at the holy sites. “The idea of the skits was to make the visits [to the holy sites] more dynamic so that they would have a deeper impact on the girls. And then we thought that if we could record them it would help the girls to give it more importance, to take it more seriously and to give it even an apostolic touch. So we thought about suggesting it to the people of Canção Nova,” said Lorli Pregl, a consecrated woman who helped organize the camp. She presented the idea to a member of the Canção Nova community, who was interested in the project and immediately agreed to it. Since part of Canção Nova’s mission in the Holy Land is to help inform the public about religious events and the lives of the Christians in the Holy Land, it was an excellent opportunity for synergy between the two movements. Last year, Canção Nova produced a video of the girls performing their skits at St Peter Gallicantu Church in Jerusalem. This year, the collaboration continued with another video on their visit to the Cenacle in Jerusalem, where the Last Supper was celebrated. In a country dominated by the Jewish and Muslim presence, Palestinian Christians are an oft-forgotten minority living in the crossfire of religious and cultural tensions. In total, Palestinian Christians make up only 1.7% of the total population of Israel, and half of them are Greek Orthodox. Catholic Palestinians constitute only one tiny fragment of a population whose life is burdened by a 20-foot wall around Palestinian territories—a wall that makes ordinary life difficult for many people. As Latin Patriarch Fouad Twal observed, Jerusalem is a city that both unites and divides believers, and those who pay the highest price are often the local Christians. “It is a pleasure from one side to see these people coming to visit the holy places, and on the other side it is painful to see the local church, the local Christians who cannot even visit these holy places,” he said in an interview on February 7, 2010. “A parish priest from Bethlehem cannot bring his faithful for a pilgrimage to these holy places. The same situation in Ramallah, and Jordan, and other parishes; they cannot move easily with so many checkpoints and the wall separating them.” The Challenge camp for Palestinian girls was one more effort to do something to minister to the local Christians. After the first summer camp in 2008, many families responded with interest to the proposal of a Challenge Club for their daughters. The club has been running since, helping the girls to learn more about their faith and the virtues, with monthly and bimonthly activities for the entire family. “One thing they especially like is when we take them to the holy sites. Most of the local Christians barely visit them; they know the Holy Sepulcher and maybe Gethsemane, but that’s it,” said Lorli Pregel. “Our great desire is to help them build a deep security in their faith. It is not easy to be such a minority in a country that lives in constant tensions. They need to become more aware and courageous about the mission that they have as Christians in this Land which needs the presence of the Christian spirit.”