For December, the Challenge Saint of the Month is Venerable Satoko Kitahara from Japan. Her life is inspiring because she shows us how you can find God even in the most difficult situations. She saw an opportunity to help others and did something about it  – dedicating her life to better the lives and faith of the poorest people in her town. With Christmas so close, she is an example of reaching out and serving those in need. 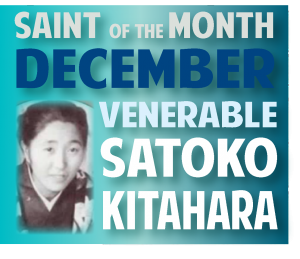 Satoko Kitahara was born in 1929 in Japan and was the daughter of a wealthy aristocratic family descended from Japanese Samurai. Her childhood was normal and she was known to be a beautiful and joyful  girl. In 1940 when Japan entered into WWII, her life changed drastically. Her father and brother were sent to fight and work for the army. Satoko was sent to do her part and work in an airplane factory in Tokyo. She lived in fear since the city was constantly under attack with bombs and warning sirens. When a bomb fell on her workplace, she miraculously escaped. Japan experienced the full trauma of war with  the atomic bombs which devastated Hiroshima and Nagasaki. After the war, Tokyo was in ruins and many people died from poverty and hunger. Thousands of displaced people flocked to the major urban centers. This is how Satoko spent her teenage years. Despite all of this she was able to dedicate her time to her studies and her diploma in 1949. One day she stumbled upon a Catholic Church and experienced an inner awakening which challenged her family and cultural beliefs, since she knew no one who was a Christian. She found herself more and more drawn in wonder to the Eucharist, to Mary the mother of Jesus, and to the great joy and peace which she experienced in prayer. So she decided to embrace Catholicism and was baptized when she was 20 years old. In 1950, Satoko met Br. Zeno, a Franciscan friar who worked with the homeless and needy in a place known as the “Village of Ants”, because of the overcrowding of people. The children and young people there  managed to survive by selling garbage. She began to visit the Ant Village to teach the children to read and to live a more dignified life.   One day she realized that the only way to truly help them was to live with them and like them. So she gave up her riches and comfort to became one with the poor.  For 9 years she lived  in the Ant  Village and she inspired all those she touched. She worked with the authorities to build a school and clean living conditions for the people there.  Her tuberculosis flared up again and she was forced to step away from her work. When she came back, she found other women helping the people and continuing her work. Satoko died  of tuberculosis  in 1958  when she was only 28 years old, but she was mourned by thousands of people, reflecting  her triumphant life of deep Christian faith and charity. Pope Francis declared Satoko venerable in 2014.