For January, the Challenge and Conquest Saint of the Month is Venerable John Sullivan from Ireland. His life is inspiring because he shows us how God can fill your heart and make you happy. He was known for being an example of a man of prayer and made a deep impact on the lives of the live of the people around him. 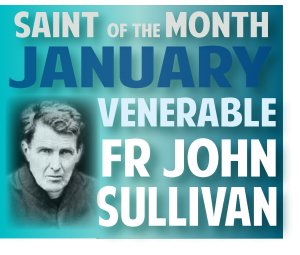 John Sullivan was born in 1861 in Dublin, Ireland. His father was protestant and a successful lawyer. His mother was from a prosperous Catholic family but they were raised protestant. John grew up in the gentle comforts and privileges of the fashionable Dublin society of the time. When he was 11 years old, he was sent to boarding school. He graduated with honors and went to Trinity College in Dublin. During this time his father Sir Edward Sullivan had become the Lord Chancellor of Ireland, which is kind of like a combination of the Speaker of the House and Supreme Court Justice in the US. John started his studies in Law to follow in his father’s footsteps but at the age of 24 he was heartbroken when his father suddenly died.  John found himself at a young age wealthy,  accomplished in his studies, with good friends and popular. He loved to be outdoors and was athletic. He was referred to as “the best dressed man in Dublin”.  After living this way for about 10 years, John did something unexpected at the age of 35 – he decided to become Catholic. His family was shocked because John had apparently not shown any interest in religion. His mother was very happy and saw this as an answer to prayers. Two years later, his family would endure an even greater surprise. John decided to become a Jesuit priest and was ordained. He worked as a Chaplain at a College and his reputation for holiness spread quickly. Many revered him as a saint. He prayed constantly: he walked with God continually, he listened to him, and he found him. That’s what people recognized in him. Many who were in need of healing flocked to him and asked his prayers – and strange things happened. The power of God seemed to work through him, and many were cured. He was always available to the sick, the poor, and anyone in need. He spent most of his life in prayer or helping others. He died in 1933 at the age of 72. In 2014 his heroic virtues were recognized by the Church and Pope Francis declared him venerable.