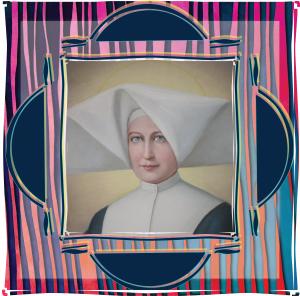 Catherine was born in 1806 in France. She was the ninth child born to a loving father and mother who lived on a farm.   As a young woman, Catherine decided to follow her dream to become a nun. She entered the nursing order of nuns founded by Saint Vincent de Paul called the Daughters of Charity. They are recognized by the distinctive habit, especially the headwear. While living in Paris, Catherine started to have apparitions from Our Lady.  The Virgin Mary say to her, “God wishes to charge you with a mission. You will be contradicted, but do not fear; you will have the grace to do what is necessary.” In one of the apparitions, the Blessed Mother appeared inside an oval frame, standing upon a globe, rays of light coming out of her hands in the direction of a globe. Around the margin of the frame appeared the words “O Mary, conceived without sin, pray for us who have recourse to thee.” As Catherine watched, the frame seemed to rotate, showing a circle of twelve stars, a large letter M surmounted by a cross, and the Sacred Heart of Jesus and Immaculate Heart of Mary underneath. Asked why some of the rays of light did not reach the Earth, Mary reportedly replied “Those are the graces for which people forget to ask.” Mary then asked Catherine to take these images and they should be put on medallions because “All who wear them will receive great graces.” Sister Catherine did so, and after two years the design of the medallions was commissioned through French goldsmith and the medals grew in popularity.  Sister Catherine spent the next forty years of her life caring for the elderly and infirm. She died in 1876, at the age of seventy. Her body is encased in glass beneath the side altar in the Chapel of Our Lady of the Miraculous Medal at 140 Rue du Bac, Paris. Her cause for sainthood was declared upon discovering her body was incorrupt. She was canonized in 1947 by Pope Pius XII. She is the one we can thank for following the request from the Blessed Virgin Mary to create the famous Miraculous Medal of Our Lady of Graces worn by millions of people around the world.