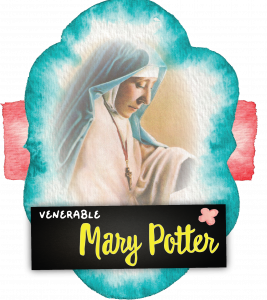 Mary Potter was born in 1847 in London, England. Her care and compassion for the sick and dying and her vision would change the lives of tens of thousands of people around the world. Mary was the youngest child and the only daughter. Her mother’s strength of character and deep spirituality helped nurture and inspire Mary’s own unshakable faith. As a young woman, Mary Potter seriously considered marriage and was, in fact, engaged for a time. She eventually broke off the engagement so that she could devote her life to prayer and good works. She started by teaching at a school for Catholic children for three years. When she was 21, Mary decided to join the Sisters of Mercy and become a nun. However, within the year, Mary became ill and had to return home. During this time she asked other women to join with her in a ministry of care for the sick and dying in her home town. Despite many obstacles, Mary’s faith and persistence eventually helped set up a home where she could do this work of mercy. Mary Potter and four other women settled into a warehouse in a very poor district of Nottingham. After much work remodeling the building, Mary had a cross put on the high roof. She called her group the Sisters of the Little Company of Mary. Because Mary endured painful and chronic illnesses throughout her life. She intimately understood the emotional and spiritual distress of the sick and dying. She could empathize with their suffering. Serving the sick and poor of the community through compassion, home care and prayerful presence, these Sisters were pioneers in what we now call hospice care. After years of building her Little Company, and having dedicated her life to the service of the sick and dying, Mary died in 1913. Pope John Paul II declared Mary venerable in 1988.