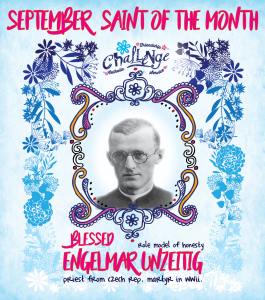 Blessed Engelmar born in 1911 in the Czech Republic. When he was 18 years old he felt the calling to be a priest and entered a seminary. His dream was to work in the missions in a poor country so he joined the Marianhill Missionaries. He was ordained a priest when he was 28 years old in 1939, a month before the outbreak of World War II. He was soon after assigned as a parish priest in 1940 in Austria. The Gestapo arrested Fr Unzeitig on in 1941 for defending the rights of Jewish people in his sermons. They sent him to the Dachau concentration camp without a trial two months later. While there, he studied the Russian language in order to help and minister to the Eastern European prisoners. He became a pastor to all the prisoners.  In the fall of 1944, he volunteered to help in care for the victims of typhoid fever at the camp.  Shortly after, he caught the disease himself.  From prison he wrote to his sister: “Whatever we do, whatever we want, is surely simply the grace that carries us and guides us. God’s almighty grace helps us overcome obstacles … love doubles our strength, makes us inventive, makes us feel content and inwardly free. If people would only realize what God has in store for those who love Him!” He was known as the “Angel of Dachau” and died of typhoid fever in the concentration camp in 1945. He was beatified by Pope Francis in 2016 as a martyr for his faith.