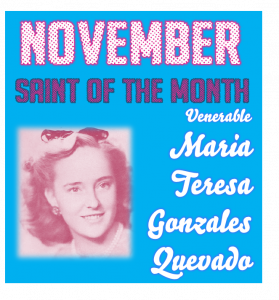 Maria Teresa was born in 1930 in Spain. Her father was a well-respected doctor in Madrid. Her mother lovingly raised her children to be faith filled and joyful. Maria Teresa was full of life and excelled at sports but was not interested in school much. She was worried more about the latest hair styles, fashions and clothing.

Teresa had a devout love for Mary and would not go to sleep at night without praying her rosary. At the outbreak of the Civil War in 1936, thousands of priests and bishops died for their faith. Three of Teresa’s uncles were among those martyred. Her father was known as a deeply religious man and for their safety, Teresa’s family fled to a country home outside Madrid. After the war, her family returned to Madrid and Teresa started at school run by the Carmelite nuns. At school, Teresa was known for her love of fashion and friends. She was even named “Best dressed” of her class. She was the captain of the school basketball team. Teresa was also a spiritual leader, joining the youth and campus ministry groups at school. When she was fifteen, she made a purity pledge to Mary and Jesus. Teresa went to a retreat when she was 17 years old and realized in prayer that she wanted to become a nun, and specifically a Carmelite nun. After graduating high school, Teresa joined the Carmelite order. The silence was difficult for her at first, but she learned to find God in prayer. She had a great love for the story and life of St Therese of Lisieux. A year after when she was only 19 years old, Teresa became ill with a bronchial disease and her father the doctor was called to the convent. She continued to get worst and was diagnosed with meningitis. Teresa was told that it would be unlikely that she would be cured. She professed her vows from her bed and participated in prayers and adoration from her bed. Towards the end of her life, she went through a great deal of pain but offered up everything for the souls who needed it. She died in April 1950 when she was 20 years old. She was declared venerable by John Paul II in 1983 for her heroic virtues