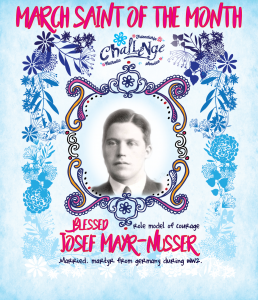 Josef was born in 1910 in Italy & his parents were German-Italian. He grew up on a farm and was raised with strong Christian values. In his youth, he joined Catholic Action and Society of St Vincent de Paul. He became local president of his chapter when he was 22 years old. Josef constantly visited the poor, providing them both material and spiritual assistance. In an attempt to deepen his understanding of faith, he read the writings of the Saints. When he was 24 years old, he became the head of Catholic Action in his diocese and he also secretly became a member of the anti-Nazi movement. In 1942, he married Hildegard Straub and his son Alberto was born a year later. As part of Nazi conscription during World War II, he was forced to enroll in the SS unit in 1944 which made him to leave his wife and newborn son for training in Prussia.

On October 4th, 1944, Josef was in training and one of his friends- Franz-witnessed his heroic act: “Josef looked deep in thought and worried. Unexpectedly, he raised his hand and said in a loud voice, ‘Major-General I cannot take an oath to Hitler in the name of God. I cannot do it… because my faith and my conscience do not allow it’.” Josef’s friends attempted to convince him to recant the explosive statement, but he rejected their efforts in order to stand up for his beliefs. Josef believed ardently that Nazism could not be reconciled in any way with the values of Christian ethics and believed that the ideology ran counter to the divine law of God. As a result of this he was jailed and later transferred to Danzig where he was prosecuted.

From prison he sent a number of letters to his wife and said of his actions, “You would not be my wife if you expected something different from me”. In 1945, he was sentenced to death for treason and was sentenced to be shot by a firing squad at the Dachau concentration camp. While on the train, en route to his death, he fell ill with a fever and died with his Bible and Rosary in his hands. He was only 34 years old. He was beatified by Pope Francis on March 18, 2017 and declared a martyr. He is known as the “Martyr of the First Commandment” because he would not put another person before God.