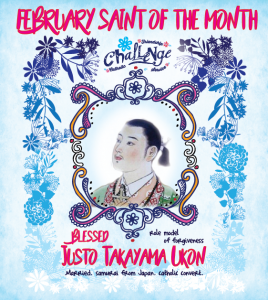 Takayama Ukon was born in 1552 in Japan during the time when missionaries were beginning to evangelize the country. By the time Takayama was 12 years old, his father had converted to Catholicism and had his son baptized as “Justo” by the missionary priests. In 1571 he participated in an important and successful battle all as part of his coming-of-age ritual which culminated in a duel to the death; Ukon won but he received horrible wounds and during his recovery he realized that he did not know or dedicate time to his Catholic faith. In 1574, he married his wife and went on to have three sons and one daughter. Justo and his father fought through the turbulent age to secure their position as lords and managed to acquire the Takatsuki Castle.

As a Catholic, Takayama used his power to support and protect the short-lived missionary expansion within Japan, influencing the conversion of thousands of Japanese. In 1587, persecution of Christians began in Japan and many newly converted Catholics abandoned their beliefs. By the 1620s, most missionaries were either driven out of the country or into underground ministry. Instead of denying their faith, Takayama and his father left their prestigious position in society and chose an exiled life of poverty. Although many of his friends tried to persuade Takayama to deny Catholicism, he remained strong in his beliefs.

Ten years passed, and the ruler became fiercer in his persecution against Christians. He eventually crucified 26 Catholics, and by 1614 Christianity in Japan was completely banned. That year, along with 300 Japanese Christians, Justo left his home from Nagasaki and fled to the Philippines. He was received by the Spaniards living in the Philippines who wanted to conquer Japan in a crusade and free the Christians. Justo did not want to participate in such a battle because of the bloodshed. Takayama died on Feb. 3, 1615. He was declared Blessed by Pope Francis in 2016.