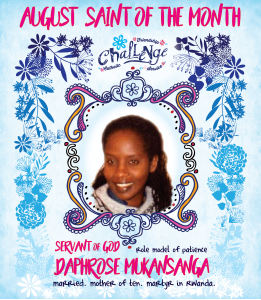 Daphrose Mukansanga was born in 1944 in Rwanda. She grew up in a Catholic community in the same parish as Cyprien Rugamba, who was to be her future husband. Although they were friends, both pursued their careers and God’s calling before finally realizing that God had intended for them to be together as a married couple. Cyprian first tested his call in the seminary for two years, and then went to school in Belgium. He was a manager and loved music. Daphrose became a teacher because of her love for children. They married in 1965 and had ten children. Cyprien went through a time when he was not active or committed to his faith like Daphrose. This caused many difficulties in their marriage. Daphrose prayed ardently for her husband and he finally converted in 1982.

From that moment they became a couple whose love and commitment were visible to everyone. The testing of their marriage and the healing action of conversion gave them particular strength in evangelizing African couples. They lived a life of intense faith in the charismatic renewal movement and in prayer groups. They showed compassion especially for sick people and street children. They met the Emmanuel Community – a Catholic movement – in 1989 during a visit to Paray-le-Monial, France.

Through their hard work and dedication, the Emmanuel community was born in in Rwanda in September 1990.Cyprien and Daphrose spoke about peace and denounced the call to violence that was spreading through the region. They were soon placed on the list of important people to assassinate during the civil war. They were killed in 1994 in their house with 6 of their 10 children. At the time of their death, the Emmanuel Community had a hundred members in Rwanda. Today there are more than a thousand members. They were declared Servants of God in 2015.