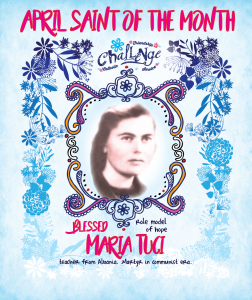 Maria was born in Albania in 1928.  Catholics were a small minority in her country but still persecuted by the communist government when she was growing up.  Maria loved her faith and wished to share it with others.  She grew up going to Catholic school and thought about being a nun herself.

She became a teacher in the same school run by nuns.  The children loved her and she would often spend her own money to buy them supplies.  She was an example of faith, often walking 5 miles to go to mass.  She was arrested in 1949 when she was 21 years old, for teaching in a Catholic school.

After being injured in prison, Maria was admitted to the hospital where she died in 1950 when she was only 22 years old.  She was holding a rosary in her hands.

Before she died, she said “I thank God because he gave me the strength to die free.”  She paid the ultimate price for her faith and is a modern St. Agnes, who forgave the persecutors. She was beatified and declared blessed in 2016 by Pope Francis as a martyr.