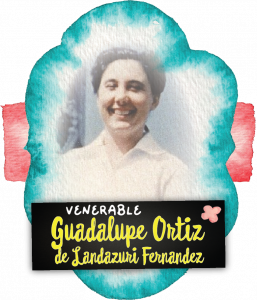 Guadalupe Ortiz de Landázuri was born in Spain in 1916. When Guadalupe was 10 years old, she and the family moved to North Africa, because of the work of her father, who was in the military. During her childhood, she stood out for her courage and boldness. In 1932, the family returned to Madrid, where she went to university for chemistry . She was one of only 5 women in her class. She continued onto study her PHd in Chemistry so she could be a university professor. Her university colleagues remembered her as a serious student, but friendly, with a sense of adventure. During the Spanish Civil War, her father was taken prisoner and condemned to be shot. Guadalupe, who was then 20 years old, joined her brother Eduardo and their mother, as they said their goodbyes to her father hours before his death, helping him remain serene at that painful time. She sincerely forgave those who had decided to condemn her father. Once the war was over, Guadalupe began to teach in grade school. One Sunday in Mass, she felt “touched” by the grace of God and asked a friend to put her in touch with a priest. After a retreat of prayer, she decided to consecrated her life and work for God. Guadalupe was 27 years old. She was know to live her life with love in her daily tasks, and sought to spend time before the tabernacle. She worked as a university residence director for young women in Spain for many years. In 1950, she moved to Mexico to continue the same work with students there. She was creative in helping others and started a mobile clinic with a friend who was a doctor. They went house to house in the poorest neighborhoods, providing medical tests to the people who lived there and giving them free medicines. Guadalupe had a big heart and a strong character. Many people said that Guadalupe had a permanent smile. In 1956, she moved to Rome to work for the Church. That year she noticed the symptoms of a heart condition and she needed to have an operation in Spain. She lived there for the rest of her life, working as a Chemistry teacher. She had another surgery on her heart and passed away peacefully in 1975 as a result of complications. Pope Francis declared a venerable person in 2018.