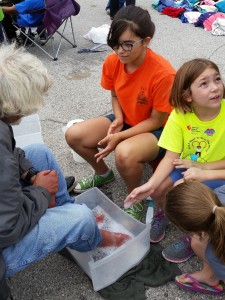 Anna Daniels works with the Challenge group, a church-related diocese program made up of six different Catholic parishes which meet at St. Benedict’s in Broken Arrow.

These young women, from fifth through 12th grade, take their message to the street, sharing their love for Jesus with their words and showing it with their actions through such missions as washing the feet of the homeless, knocking on doors to pray with the elderly, and making friends with the Catholic sisters. They refer to these community service projects as Apostolic missions. John 13: 14-17 14 Now that I, your Lord and Teacher, have washed your feet, you also should wash one another’s feet. 15 I have set you an example that you should do as I have done for you. 16 Very truly I tell you, no servant is greater than his master, nor is a messenger greater than the one who sent him. 17 Now that you know these things, you will be blessed if you do them. Taking scripture one step further, on one of these missions the young women set out to offer manicures and pedicures to the homeless and other impoverished people. They worked with a non-affiliated group, Tulsa Homeless Outreach, which provides food, clothing and shoes for the homeless and others in downtown Tulsa.

After having a fundraiser and getting their supplies together, the girls and their families traveled to 11th and Denver in Tulsa to put their plan to work. “The girls were out in the middle of it all,” Daniels said. “The feet of the homeless are not pretty. They washed their feet and painted the fingernails of both boys and girls. They did face painting. The smiles on the faces of the people were bigger than anything I’ve ever seen. Shoes and socks are needed, but the human touch brings such a warmth to the heart and mind,” said Daniels. “It’s huge! You can’t just awkwardly wash someone’s feet. There’s conversation. You can’t ignore someone when you’re painting their nails. You have to look up at them at their face.”

According to Daniels, the girls took with them to 11th and Denver empty basins and Igloos filled with super hot water. The hot water was poured into the basins with room temperature water to reach the proper comfort level. They were able to make the water last long enough to be available for all the people. “It was a beautiful, beautiful day. We were out there for two hours, but the memories will last a lifetime. We will do that every other year, because there are so many other missions they want to do throughout the year, it’s difficult to do them all.”

Another mission of the Challenge group is their annual fashion show. “The fashion show illustrates for young girls and their parents what it’s like to live and dress as a chaste woman or girl. You don’t have to flaunt everything. You can still be beautiful on the inside and outside. We are called to live out our vocation; our vocation is to be women of Christ and live virtuously, not just in actions but in dress and mannerisms.” Before the fashion show a professional model met with the Challenge team and told them it’s not so much how they stand but how they present themselves. “It’s mostly about confident women, women who are confident about their beliefs and why they believe what they do.They are challenged in this world to be courageous in their beliefs,” Daniels said. “Challenge is a safe place. The girls feel safe in the program because they can be who God wants them to be.”

Challenge has two other missions which stand out. One is evangelizing, something new for the Catholic faith. “You would think the girls would be afraid of that, but they are right at that door. They are praying from their heart. They are listening to their neighbors.” During this experience they met and prayed for a lot of elderly people, many men who were caring for their wives. They also spent Christmas with sisters at St. Joseph’s monastery.“In the past we have just sung to them, but we wanted to do something more,” said Daniels. In the past one of the sisters would talk about vocations and their desire to have more sisters join them. This year they did a craft with the girls. “I was worried it would be silly,” Daniels said. “We made little candy canes, and it takes you back to your childhood. We paired them us (girls with sisters). It was really beautiful, and we became close.”Since then the Challenge team has prayer partners with the sisters, and they exchange cards and prayers.