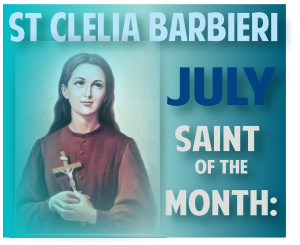 In the month of July, the Challenge saint of the month is St Clelia Barberi. Her story shows how you can be an example of faith and prayer  – no matter how young you are. She lived a simple but meaningful life that touched many people’s lives.

Clelia was born in Italy in 1847 to a poor family. She had a younger sister and  her father died when she was just eight years old. At an early age, Clelia began to spend a lot of her spare time in prayer.  She was raised in a very religious household. She worked alongside her mother spinning hemp to support the family. This was the main work found in her home town. It was in these moments of spinning that she came in contact with the other girls in town. Clelia worked with joy and love, praying and thinking of God at all times and even speaking of Him to her companions. Clelia became a catechism teacher’s assistant when she was 14 years old. She became such an inspirational leader in the community that the parish priest entrusted her with teaching and guiding young girls in catechism. By the time she was 17, she rejected many marriage offers, opting instead to lead a pious life and consecrate her life to God. Clelia eventually founded a group called the Sisters of Our Lady of Sorrows when she was only 21 years old. She is the youngest founder of a religious community in the history of the Catholic Church. The group began to minister to the poor and sick in the community, teaching the faith to the children of the town. Two years after founding the congregation, Clelia Barbieri died of tuberculosis in 1870. There are now 35 centers of her group across Italy, India and Brasil. She was canonized by Pope John Paul II in 1989.