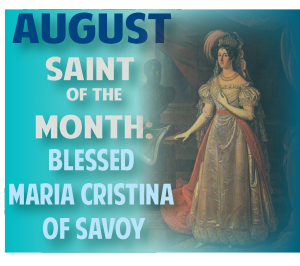 In August, the Challenge saint of the month is Blessed Maria Cristina of Savoy. Her story shows how you can be an example of service  – no matter what your circumstances in life.  During her beatification in Naples, Pope Francis said some beautiful words about her life. “Queen Maria Cristina was a woman of deep spirituality and great humility. She was able to bear the suffering of her people, becoming a true mother of the poor. Her extraordinary example of charity shows that the good life of the Gospel is possible in every environment and social status.”

Maria Cristina of Savoy was born in 1812 in Italy. Maria Cristina was the youngest daughter of King Victor Emmanuel I of Sardinia and Archduchess Maria Teresa of Austria. In 1832, when she was 20 years old,  Maria Cristina married King Ferdinand II,  who was only 22 years old and ruled the largest Italian kingdom before Italy became a unified country. She was Queen for only 4 years because she died at the age of 24 but the short life that she lived left an impression on all those who knew her.  Maria was described as beautiful but also timid and shy. She used her power and position to help those in need.  In a time that was known for many luxuries and crime at royal court, Queen Maria Cristina was quite the opposite. She was known for her innocence, modesty, and sacrifices in her own life to help those less fortunate.  She would always reach out and take care of the sick personally and the poor. Many people made fun of her and had little patience for the way she cared for those in need.  She died in childbirth, after having given birth to her only child and son, who would later become King.  She was known to be such a kind, virtuous woman that immediately after her death people began praying to her and miracles occurred. She was beatified on January 25, 2014 in  Naples, Italy by Pope Francis.