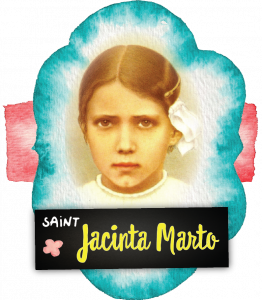 Jacinta was born in 1910 in Fatima, Portugal and was the seventh child in her family. She was one of the three children who Mary appeared to in Fatima. She loved games, singing and dancing. She was very affectionate, kind and gentle girl. Jacinta was there with Lucia and Francisco for the apparitions of our Lady. In the second apparition, Lucia asked to be taken to heaven, and the Lady replied that Francisco and Jacinta would be taken soon, but Lucia would have to wait for a time. Jacinta was affected deeply by the terrifying vision of Hell reportedly shown to the children at the third apparition. She became deeply convinced of the need to save sinners through penance and prayer as the Virgin had instructed the children to do. At this time the Mayor of her town devised a scheme to discredit the apparitions by terrorizing the children. He tried to bully them into admitting they lied and he threatened them. The children showed so much courage even though they were jailed. He detained them to keep them from meeting with the Lady on the day of the fourth apparition. In August 1918, when World War I was nearing an end, Francisco and Jacinta both came down with the Flu which at the time could be life threatening. Francisco died from the Flu, but Jacinta survived and later came down with tuberculosis. She went to many hospitals and months later returned home. She was able to receive holy communion every day in most hospitals and this made her happy. Jacinta died peacefully from complications of the tuberculosis. Pope Francis declared both Jacinta and Francisco saints in 2017.