For February, the Challenge  Saint of the Month is Venerable Serafina Cinque. Her life shows us a vivid example of what it means to give to others without looking for anything in return. 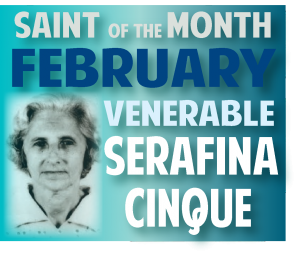 Noeme Cinque was born in 1913 in the Amazons in  Brazil. She was the second oldest of thirteen children. She felt called to be a nun early in her life, but she needed to work to help her family financially. She decided to become a teacher and nurse. She would often visit the sick and elderly people in their homes. She also taught catechism locally and was a member of Catholic Action at her parish. Finally, in 1948 she joined an American  congregation of nuns – the Adorers of the Blood of Christ – who were working in Brazil missions. It was then she took the name Sister Serafina. She came to the United States for a few years to do her novitiate and studies and then was assigned to an area in the Amazons that had no doctors. She was the principal of a school there, but was also the medical professional for the entire region, teaching nutrition and hygiene as well as caring for the sick.  Her dedication and unselfish attitude was so great that in 1969 she fell ill with tuberculosis, but recovered. In 1971,  she was assigned to another area in  Brazil, which had a growing population due to the construction of the Trans-Amazonian Highway. With the growth of population, there was a lack of medical professionals and space in hospitals. Sister Serafina helped establish the Divine Providence Home for pregnant women and infants who could not be admitted to hospitals. The house could take in up to 40 women a day.  There she was able to offer special care for those who were homeless. In 1985 she built another home called the Refuge for the sick and abandoned. She died of cancer in 1988 when she was 75 years old. She is remembered as the “Angel of the Amazons” by the local people. Pope Francis declared her venerable in 2014 because of her heroic virtues.