For April, the Challenge and Conquest  Saint of the Month is Venerable Salvo D’Acquisto. His life is an example of compassion and mercy, giving up his life. 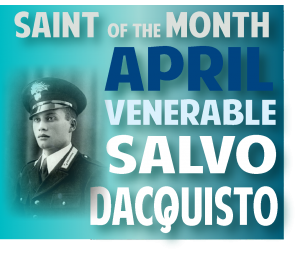 Salvo D’Acquisto was born in Naples Italy in 1920. He was the oldest of eight children. When he was 19 years old he joined the Italian Army and police  force – called the Carabinieri. He was sent to North Africa for a few years o service. He was a devout Catholic and strong leader.  His letter’s home to his family and girlfriend show his faith and dedication. In Africa,  he was wounded in the leg and caught Malaria. He recovered from both of these and returned to Italy to finish his training and school. He graduated and was assigned to work in an outpost near Rome. During this time, WWII had begun and in 1943 Mussolini was overthrown and in September of the same year German soldiers occupied Rome, camping out near Salvo’s outpost.  On September 22, Salvo went to Mass, received communion and went to the sacrament of confession. He did not know what was to come in the near future but he was prepared spiritually. His general  was away that day and he was left in charge of the outpost even though he was only 22 years old. That same day, the German soldiers were inspecting boxes of abandoned ammunition, when there was a sudden explosion which injured the Nazi troops. The soldiers blamed the death on the local people in the neighborhood and demanded that Salvo’s men  help find the guilty party. Salvo tried in vain to explain to the German commander that the explosion was an accident but the German commander conducted searches and arrested 22 local residents. They also took Salvo by force to the station where the people were being questioned. During the interrogation the Italians insisted they were innocent and Salvo tried to convince the soldiers that it was the truth, but they refused to believe that. Instead the Germans ridiculed, insulted and beat Salvo. The prisoners were handed shovels and told to dig their own graves but Salvo would not let that happen to the people so he “confessed” to being the one who was guilty and begged for the prisoners to be released. The Italians let the 22 people go and Salvo was executed by a firing squad, giving up his life for 22 other people. He is considered a martyr and is in the process of canonization. He was also awarded the gold medal for military valor.  Several movies and mini series have been made about his life.