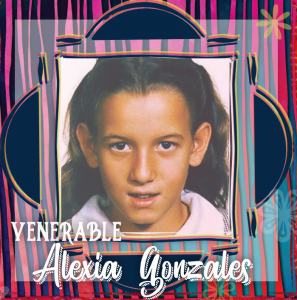 Alexia González-Barros González was born in 1971 in Madrid, Spain. She had a large family with seven brothers and sisters. Her parents were part of the spiritual movement Opus Dei and very devoted to their Catholic faith. Alexia learned the catechism from her mother and made her first communion in Rome, Italy. While there, she ran up to Pope John Paul II and gave him a hug. He blessed her and kissed her forehead.

When Alexia was only 13 years old, she started to feel a dull pain in her right shoulder that later spread to her back. The doctors diagnosed Alexia with a cancerous spinal tumor which led to four operations. The operations were not successful, and the cancer spread quickly.

Alexia faced this illness with faith. She continued to receive the sacraments regularly – communion, confession and anointing of the sick. She battled the cancer for 10 months and died in 1985 at the age of 14.

Her life was simple but holy. Her friends all were greatly impressed by the way she lived her life. Nine biographies about her have been published since her death. Pope Francis declared her venerable because of the heroic virtue she lived in her suffering.

Begoña Hernandez, Alexia’s classmate and one of her best friends, recalled that the youth lived out her illness “with joy” and trust in God. Hernandez said that she had the “conviction that Alexia González Barros was a saint” from the moment that she died in 1985.