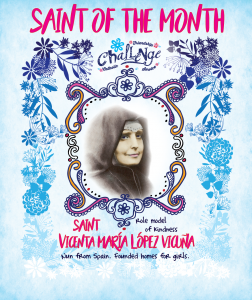 Vicenta was born in 1847 in Spain to a very religious family. Her father was a lawyer. She was sent to school in Madrid and her uncle who was a priest, educated her in the faith. Although she was known for her beauty, she refused to entertain the notion of an arranged marriage and she instead decided to take a private vow to remain chaste and dedicate her life to God. She realized at that time that God was calling her to the religious life. At the same time, she lived with her aunt who had founded a home to help girls who had to work. Vicenta realized God had placed this home and group in her path. She decided to found a religious group of nuns who would help orphaned girls and help them get decent work. She received approval from the Pope and began her congregation shortly after. It was called the Daughters of Mary Immaculate. By the time of her death in 1890, the group had grown throughout Europe and Latin America helping thousands of girls. She was proclaimed a saint in 1975.