The fifth annual New England Challenge Clubs Video Contest was held April 28, 2007, at Overbrook Academy in Warwick, Rhode Island. Eleven Challenge clubs from Rhode Island, Connecticut, Massachusetts and Maine reunited to compete for awards and share Challenge spirit. The mission of Challenge, a fast-growing international organization and member of the Mission Network, is to form dynamic Catholic leadership in young women. Part of the Challenge formation program includes learning about the mass media and how it plays a pivotal role in forming the conscience of today’s youth. April Pickett, 18, is a team leader of the Challenge club in Wakefield, RI. She was enthused that her club, founded this past September, could participate in the contest for the first time. “I think it’s important for young people to learn what mass media is and that it can be a great tool for evangelization,” she said. “A lot of them don’t even realize how much they use the mass media. We did a little survey in our last club meeting, adding up the hours the members spend on TV, Internet, movies, and video games each week. They were shocked at the total numbers. They had no idea they were spending that much time. Girls today also need to know what the dangers are. They need to be aware of the positive and negative things media can transmit; they need to be aware of what they are watching and reading, or else they could harm their relationship with Christ.”To enter the contest, each team created a 5-10 minute video on the theme, “Love one another as I have 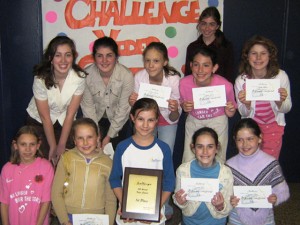 loved you”, chosen because it is the theme of the first-ever international video contest to be held at the Youth and Family Encounter in Atlanta this July. That way, this contest could double as a preparation for the international competition. The team wrote their screenplays, directed, acted, and created costumes and scenery. Some were able to count with professional help. “For my team members,” says April Pickett, “it was a chance for them to discover they had talents in acting and writing and that they could use them for God.” And can today’s young people connect with and get excited about a theme on charity? Definitely, said Clare O’Connor, 15, team leader of a Connecticut Challenge team. ” The culture that we live in is pretty selfish,” she said. “Everything is about you and making you feel good. Having friends is great, but when you start to love Christ and practice charity, your friendships become real. You have friends who love Christ as you love Christ and appreciate Christ’s love for us.” Her team won the award for “Best Performance” with a creative and comic rendition of the life of St. Bathildis, a humble and charitable slave-girl-turned-queen of medieval times.Angela Hill, 18, a team leader from West Springfield, MA, helped her team re-create on film the life of Blessed Jose Luis Sanchez del Rio, a 14-year-old Mexican martyr. “From making the video on Jose Luis we learned the value of fidelity and persevering for Christ, despite how people might try to draw you away,” she said. “The theme is very important; charity can be applied to life everyday and is the best way to draw people to Christ. In the Gospel, Christ says they will know us by our love. By showing our own witness of charity, it’s letting Christ show his love to the world.”Even the competition itself was marked by charity. Betty Ann Warner, Challenge Club president for Worchester, MA, said her daughter Christina’s team was more focused on winning last year, but this year’s “theme reminded them to fulfill their mission of charity. Charity is their mission. This year they’re focused on how much they can live charity. It doesn’t matter to them who wins.” The team took home second place for “Grandma’s Diary”, the story of a self-absorbed girl who time travels to the World War II era and learns self-giving from her teenage grandmother.Surprisingly, top honors of the night went to the youngest team; the 5th grade Challenge team from Prospect, CT, took first place for a well-acted and humorous drama titled, “Let Me Tell You a Story”. A girl, bullied at school, seeks advice from yet another wise and witty grandma, who tells her the story of an Elizabethan ancestor who returned charity for being insulted. Allie Wehner explained the motive behind the story, “In today’s world, many girls, many people, don’t have respect for each other and treat each other poorly. We wanted to use the story in the video to show that not only does this happen today but it happened in the past, and will keep happening unless we try and learn from the past, and love each other.” The end result of the contest was not limited to making great videos. “Our team learned perseverance, patience, and teamwork”, said Erin O’Luanaigh. Angela Hill’s team was energized to just be with other Challenge clubs, “This was our first apostolic project with other Challenge girls, and it was an eye-opener for our team. Wow! There are lots of Challenge girls!”Clare O’Connor was grateful not just for the impact on her team, but on her own life, too, “The Challenge formation activities help me become a better leader. I love setting an example for my girls; I love forming them, and being with them. And it helps me get closer to Christ. We learned teamwork and bonded together. We started each filming session with a prayer and ended with a prayer.”