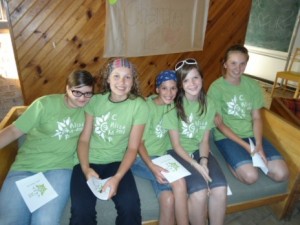 Summer 2012 was a busy one for Challenge and Conquest youth groups. Conquest hosted 31 camps for boys in the US and 7 in Canada, with more than 1000 boys in total attending. Challenge held 22 camps in the US and 4 in Canada, with a total of more than 650 girls. This year, Conquest spotlighted the 2nd Annual Conquest National Camp, Call & Duty: Undaunted Courage, which was held in Elizabethtown, PA. This year, the camp organizers used Facebook to give parents daily updates on the boys’ activities, which was very successful. More than 200 boys attended Conquest’s largest camp in Canada, Camp Arcātheos. This medieval-themed camp, held each year in Alberta, gives boys a hands-on experience of the epic battle between good and evil. Three of the Conquest camps in the US were day camps this year; Todd Brechbill, Conquest national director, says that these camps are growing in popularity, especially for younger boys. Most of the Challenge girls’ camps this year used a unified theme: Live It! The national Challenge office offered the theme to the camps as a package, complete with a camp guidebook and CD, as well as other optional items such as water bottles and T-shirts. The package was a hit, and next year another theme will be offered. Girls’ camps in Canada included 2 French camps in Quebec, as well as Camp Captivenia, the ‘sister camp’ of Camp Arcātheos. All told, it was a successful summer for Challenge and Conquest; through their camps, they were able to give many young people a fun and faith-filled experience.