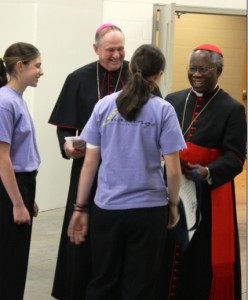 It is not every day that the girls involved in Challenge get to meet one of the most currently well-known Cardinals in the Church. But that is just what happened at the “Christ Our Life” Conference that took place in late 2010 in Des Moines, Iowa at the Iowa Events Center. Participants in the local Challenge club for girls and members of the Pure Fashion program got to meet Cardinal Francis Arinze, Prefect emeritus of the Congregation of Divine Worship and the Discipline of the Sacraments. Cardinal Arinze was one of the featured speakers at the Iowa conference. Other speakers included: Catholic evangelist Matthew Kelly; singer and quadriplegic Renee Bondi; missionary Marino Restrepo; and Fr. Rick Wendel, a pastor from Dodge City, Wisconsin, who gave his vocation testimony. There were also several vendors selling Catholic religious items and literature, and Catholic organizations and programs featured at booths during the event, including Challenge and Pure Fashion. The Challenge girls presented Cardinal Arinze with a spiritual bouquet of prayers and sacrifices. The girls from Pure Fashion gave him a photo scrapbook explaining the mission of Pure Fashion, including photos of past fashion shows from the program.“Cardinal Arinze was visibly pleased with the presentations and encouraged the girls to be faithful friends of Christ,” said Eleanor Segraves, Regnum Christi consecrated woman who works with the local girls’ apostolates. During the conference, Cardinal Arinze concelebrated Mass with Des Moines Bishop Richard E. Pates, and many priests from the diocese. During his homily, the Cardinal spoke about the importance of bringing Christ into families and the workplace, especially through a personal commitment to daily prayer.