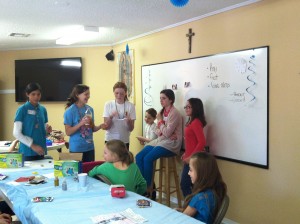 Mary Henkel, an 8th grade Challenge member in Atlanta, wanted to plan a retreat for girls at the Parish so that they could experience what she has experience through Challenge. She put together a little testimony about why and how she organized this activity.

“I came up with the idea of doing retreat for girls when I was talking to my Mom. She was asking me about my day, and I was saying to her how much I wanted to be a team leader. I was, at the time, one year too young to be leading a team. My mom suggested that I contact a bunch of fourth graders (who would be in Challenge next year) and do something with them. That’s when the idea to run a retreat came to mind. I’ve always loved Challenge retreats, and I wanted to share that experience with other girls!!! This was the perfect way for me to do it, and it would help me get experience for when I would actually be a Challenge team leader. 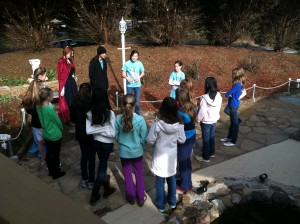 I planned and organized the retreats with my friends. We got together, wrote down what message we wanted the girls to learn, and planned activities that would help get that message through. I learned a bunch of communication skills, as we were planning. I was the one who had to make the phone calls, send detailed emails, follow up, and promote. It was a little hard at first, but as I had more practice, it got way easier! I have had great experiences organizing and leading the retreats. It’s helped me learn what it means and takes to be a good leader! We have to be a good example to the girls, because they really look up to you! It’s helped me grow closer to Jesus, and also form relationships with the girls, and the team leaders I’m working with. Most of all…it was really fun! I realized, by doing this, that it is something that God wants me to do in my life! On the very first retreat we put on, we had about 14 girls who came. It was a wonderful success, and the parish had never really seen anything like this before. Two girls who had attended the retreat (5th graders) thought it was so cool that we had done this retreat all by ourselves, they wanted to put one on too! They asked for some advice and a few months later, put on a retreat for 2nd graders. It was a HUGE success and all the girls who attended …loved it! The whole reason I got motivated to do retreats for girls, is because I had such amazing experiences at Challenge retreats! I wanted to give other girls a chance to have their own experience of Christ. Challenge is what introduced me to the idea of retreats for young girls. Without it, I would have done NONE of this!!”