Posted by Nadine McMillan
Virtue of the Month 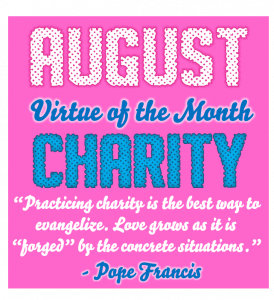 The virtue of the month for August in Challenge & Conquest is charity.  When you think of people who were amazing examples of charity – Pope Francis and Mother Teresa come to mind as great examples of charity in action. Pope Francis will be canonizing Mother Teresa on September 4th, 2016. It is a day to celebrate a great person  who  truly followed  Christ’s command to love one another. It is very appropriate that Pope Francis is the one to canonized her since charity has been his main priority.

In the gospel we see Jesus’s example of charity by  feeding the hungry, visiting the sick, and so on. Mother Teresa literally dedicated her life doing the same things. It helps us in our own lives to see the example of other people like Mother Teresa practicing charity. It makes it more real and tangible for us, not a lovely theoretical idea.

That is why this month living the virtue of charity is important. We not only are helping those we are directly reaching out to but we are also helping inspire others to do the same. Charity is like a ripple or wave that gains momentum.

In 2000,  Gallup polls asked Americans which person they most admired from the last 100 years. Mother Teresa came out on top, and it wasn’t even close – 49 percent named her, with the next closest being Martin Luther King Jr. at 34 percent.

Admiration leads to imitation. That is why her charity and our charity can make an impact on lives.