This past April 20, The Catholic Sun (the Phoenix diocesan newspaper) published an article about a local Challenge girls club’s Hike for Vocations, which raised $1,200 to support tuition for the Institute for Priestly Formation at Creighton University in Nebraska. The full article can be read online or below. 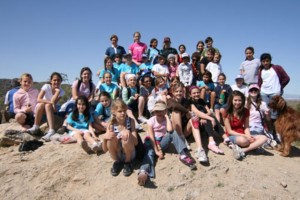 A group of 40 young hikers climbed South Mountain, offering a Hail Mary and a litany for each of the Phoenix Diocese’s 23 seminarians along the way. Before their hour-long ascent up the Javelina Canyon Trail March 27, the members of Challenge Club — a local Catholic group of girls ages 10 and up — had to find the seminarians. A few lay consecrated members of Regnum Christi, who coordinated Challenge’s first Hike for Vocations, hid photocopied headshots of each seminarian under rocks along the trail. The girls had to match the recovered photo with their “Wanted: seminarians” poster. The girls hiked in three groups based on their grade in school. They fretted over “lost” seminarians and rejoiced each time they found one. “It was like losing one of your best friends,” 10-year-old Grace Zwemke said each time her group struggled to find their seminarian. As soon as someone found him, Zwemke said, “It was like gaining another friend in a holy and spiritual way.” Fr. Paul Sullivan, diocesan director of vocations, loved the idea of the hike vocation mountain hike Challenge and hopes to join the girls next year. “As the seminarians will attest, it is a great blessing to be prayed for during formation, which is certainly a time of grace, but also a time of challenges and growth,” Fr. Sullivan said. “This is where that prayer comes in.” The vocations hike was also about affirming the priests and women religious in their own lives. The girls individually collected signatures from these holy men and women — including Bishop Thomas J. Olmsted — in the weeks leading up to the hike. “The priests in our school are great and I just wanted to do it for them and the sisters,” said 10-year-old Anna Hesslin, a St. Daniel the Prophet parishioner. “As we went up probably the steepest part of the trail, one of the girls started to say, ‘Whew, are we almost there? This is tough,’ a young consecrated woman of Regnum Christi recalled. The two quickly recalled the value of sacrifice and continued climbing with enthusiasm. “The girls didn’t want to give up; they felt responsible for praying for all the priests and religious they had asked to sign their vocation card,” she said. After 10-year-old Lauren Tewes, a St. Timothy parishioner, had reached the bottom, she started climbing again to escort a friend’s mom down the final stretch (parents, siblings and pets also made the climb). She compared her struggles on the ascent to those seminarians might face during formation. “You always want to stop, but you get to the top and it’s worth it,” Tewes said. The Hike for Vocations also supported seminarians financially. The girls raised $1,200 in sponsorships to make the climb. The hikers called Fr. Sullivan, the diocesan director of vocations, from the third and final peak to share the good news. The priest had just celebrated a Mass with 160 moms and daughters. It was a great experience of the family we have in the Mystical Body of Christ. Group members presented the check to Fr. Sullivan and the bishop March 29 after the Chrism Mass at Ss. Simon and Jude Cathedral. Funds will support tuition for the Institute for Priestly Formation at Creighton University in Nebraska. Three diocesan seminarians are expected to join a few hundred from around the United States this summer for a chance to deepen their prayer life in union with Christ.